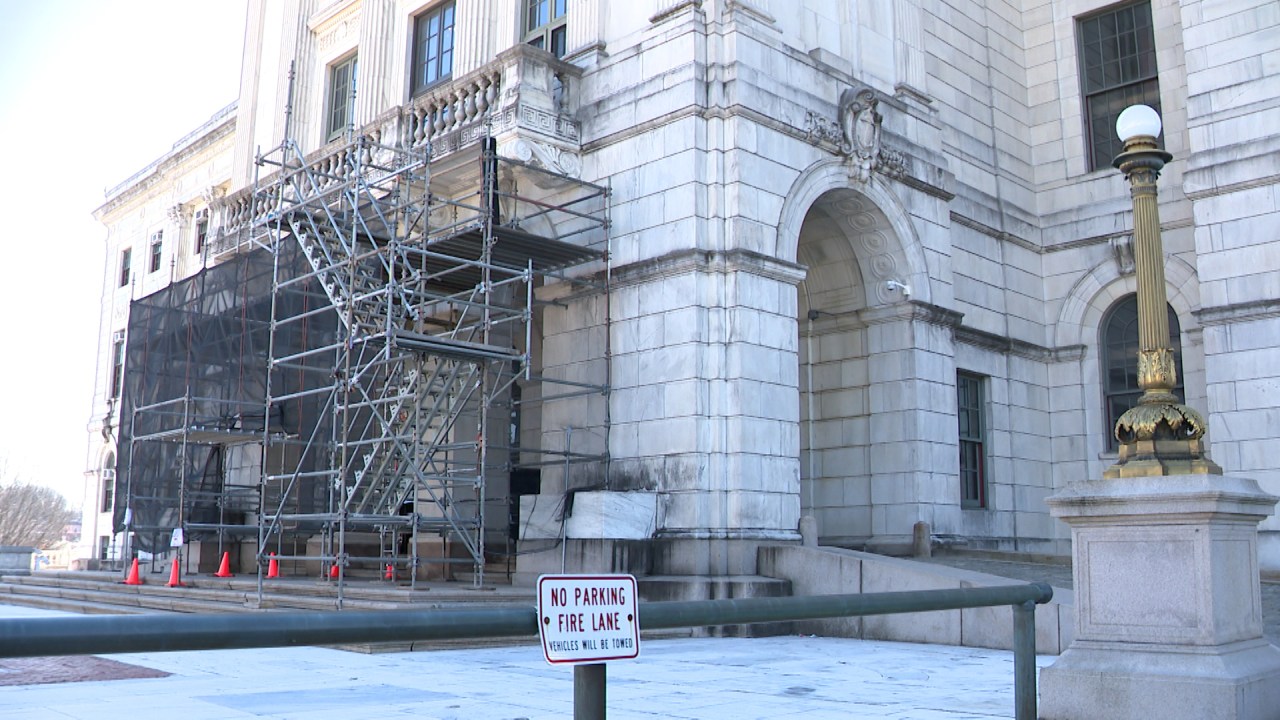 PROVIDENCE, R.I. (WPRI) — Restoration advocates are warning the State House is in desperate need of repair, as parts of the 120-year-old building atop Smith Hill are crumbling.

On Feb. 28, a large chunk of marble from a corbel — which helps support a balcony — fell and smashed into the ground near where people enter the building from the uphill side on Smith Street. The incident spurred state officials to quickly construct scaffolding above the door. Longer term, the R.I. Division of Capital Asset Management and Maintenance is reviewing its options after requesting tens of millions of dollars for maintenance work.

“The area where the piece fell has been cordoned off for safety and workers’ access, and the rest of the corbels are being evaluated,” state spokesperson Derek Gomes explained.

An initial investigation led state officials to conclude the crumbling was caused by water infiltration along with repeated freezing and thawing. Gomes said inspectors have examined the other balconies with similar architecture, and they didn’t find any similar damage.

“The state is continuing its investigation with an architect, engineer, and mason to remove a marble corbel, design a permanent repair, and implement it,” he added.

The falling marble has drawn concern from state workers, lawmakers and others who regularly attend General Assembly hearings, along with State House Preservation Society Chair Sally Strachan, who said the incident should serve as a warning that the building is in dire condition.

“The people’s house is in disrepair,” Strachan said.

Strachan’s organization typically advocates for the restoration of historical material inside the State House. The nonprofit raises private dollars to maintain and restore various items, such as the art collections and paintings that adorn the hallways between chambers.

Despite the indoor focus, however, Strachan said she’s become increasingly worried in recent years about some of the bigger-ticket items keeping the building together, such as the exterior marble.

“When you stand here and look up you can see underneath here, it is terrible,” Strachan told Target 12 during an interview outside the State House.

The deterioration was exacerbated beginning several decades ago when the marble was improperly cleaned, Strachan explained. The cleaning solution ruined the finish of the marble, she added, exposing it to the unforgiving elements of Rhode Island weather.

“When a piece of marble falls of a historic building — that is a sign of a problem,” she said. “That doesn’t just happen. That would be a red flag.”

And it’s not just the exterior facing challenges.

Strachan also pointed to other issues plaguing the historic building, including an internal HVAC system that fails to properly heat and cool the building during summer and winter months. The HVAC issues are so bad that at times lawmakers’ windows can be found wide open in the middle of winter, in an effort to offset sweltering temperatures.

On the other hand, anyone who regularly attends a House Finance Committee hearing in the building’s basement knows to bring an extra layer of clothing, as the room where some of the state’s most important financial decisions are made becomes frigid — regardless of the outdoor temperature.

Beyond frustrating lawmakers and others who frequent the State House in person, Strachan said the lack of control over how the building is heated and cooled damages material inside.

In his budget plan released in January, Gov. Dan McKee proposed spending $54 million over the next six years on State House renovations, including replacing the HVAC system, improving legislative leaders’ office suites and repairing the roof. Part of the money would come out of the state’s $618 million budget surplus from last year. Lawmakers typically make a final decision on the budget by the end of June.

The McKee administration also recently solicited bids from consultants for assistance with a “comprehensive visioning effort” for the 16-acre State House grounds. State officials said they hope to create “a well-developed, facilitated shared Mission Statement and Strategic Vision for the Rhode Island State House moving forward.” Three firms are vying for the contract.

The bidding document noted the State House’s history: “The building has the fourth-largest self-supporting marble dome in the world, and it houses numerous works of art, monuments, and memorials of significant historic value, including the original Rhode Island charter granted by King Charles II in 1663.”

Strachan said she’s encouraging lawmakers to support the proposed State House renovation money, which she said will go toward addressing some of the most concerning issues. And she argued all residents have an interest in seeing the work get done.

“The building belongs to the people of Rhode Island,” Strachan said.

Tim White ([email protected]) is the Target 12 managing editor and chief investigative reporter at 12 News, and the host of Newsmakers. Connect with him on Twitter and Facebook.

Eli Sherman ([email protected]) is a Target 12 investigative reporter for 12 News. Connect with him on Twitter and on Facebook.

Ted Nesi ([email protected]) is a Target 12 investigative reporter and 12 News politics/business editor. He co-hosts Newsmakers and writes Nesi’s Notes on Saturdays. Connect with him on Twitter and Facebook