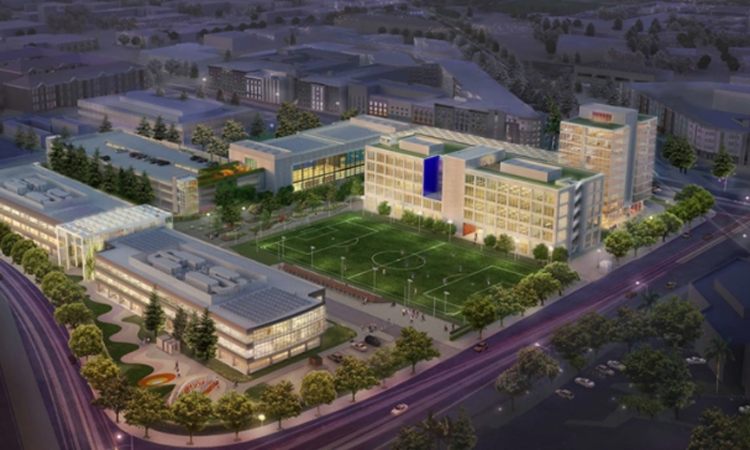 SAN JOSE — An elite New York City school has bought an office building next to its emerging campus in San Jose near the city’s downtown, an indication the school is expanding its education hub.

Avenues: The World School, acting through an affiliate, has bought an office building at 525 Race St., documents filed on April 1 with the Santa Clara County Recorder’s Office show.

The school paid $33 million for the building, according to the public property records. The purchase was an all-cash deal.

The office building, whose current tenant is Vocera Communications, is next to a campus Avenues is preparing to open next year.

“The project proposes to demolish one existing office building and three warehouse buildings, and redevelop the site for use as a private prekindergarten through 12th-grade school,” documents on file with San Jose city planners show.

The school’s first campus opened in 2012 in Manhattan’s Chelsea neighborhood. The Avenues website also lists physical campuses in China and Brazil, as well as a digital offering called Avenues Online.

Avenues charges $62,700 a year in tuition at its New York City school. A tuition schedule for the San Jose campus wasn’t posted on the school website.

The Silicon Valley campus is slated to open sometime in 2023.

Ahead of that anticipated opening, the school is attempting to recruit a select cadre of students who are willing to be “trailblazers” at the Silicon Valley campus, according to a post on the organization’s website.

“The Founding Class Program offers a unique opportunity to a small cohort of students in grades 6-9 to act as trailblazers and co-creators of our new campus” as part of an “opportunity to shape the culture” of the future educational hub, Avenues said on its website.

Students will focus on the theme of innovation during this endeavor, the school said.

Through project-based, interdisciplinary learning, students will discover and develop their passions, engage in community partnerships, and help build the culture of their new school,” the post stated.

“Students will develop the skills and qualities necessary to become architects of their own futures as well as the future of Avenues,” according to the school website.

In 2019, Avenues paid $27.1 million for an office building at 550 Meridian Ave. that represented the beachhead for the school’s Silicon Valley campus.

Plans filed with the city show that this purchase was part of a wide-ranging redevelopment of the majority of a site that’s bounded by Meridian Avenue, Saddleback Street, Race Street and Parkmoor Avenue.

The 11.9-acre campus will include numerous other features besides classrooms and office space.

“A gymnasium and aquatic center, theater building, secondary classroom building and a student lab building” will also be part of the new campus, the city documents state.