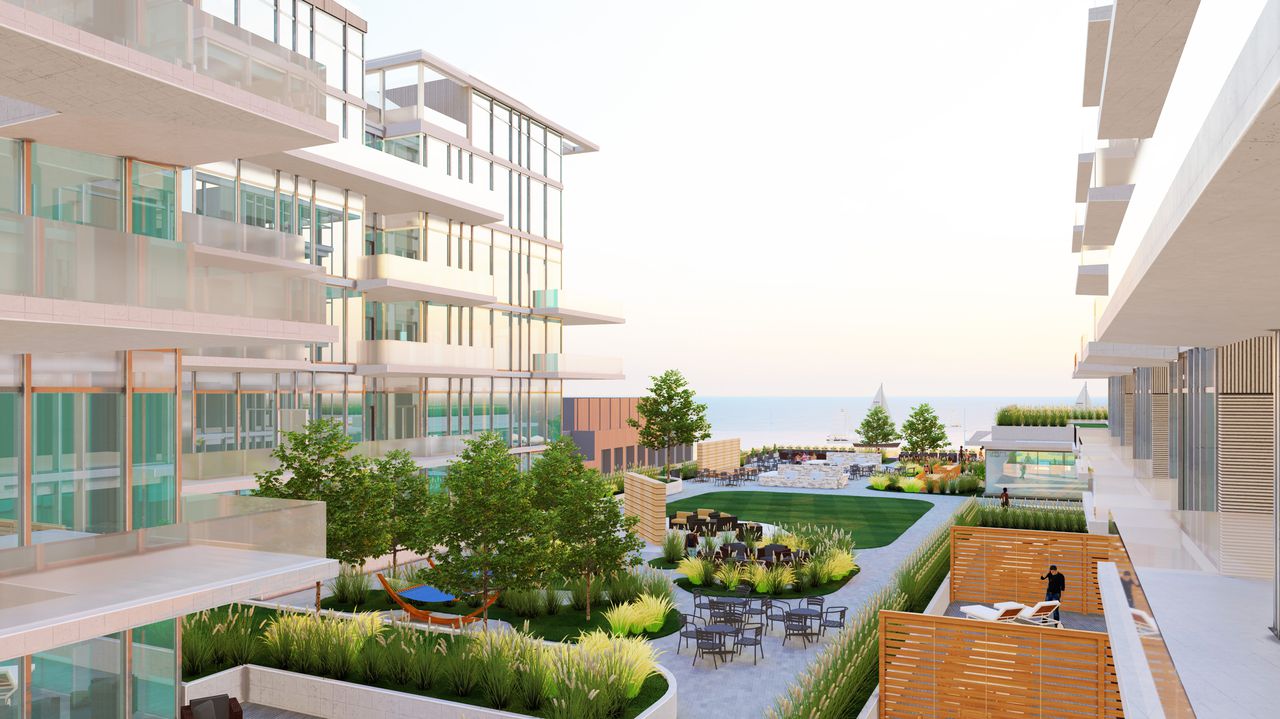 If you imagine housing at the shore as exclusively quaint Cape Cod-style homes, then you’re about a decade behind the times, at least when it comes to the ritzy oceanfront properties sprouting up in Asbury Park. And now there’s more luxury housing coming to the seaside city.

iStar, the master developer of Asbury Park’s waterfront redevelopment area, is teaming up with developers Toll Brothers, K. Hovnanian and Somerset Development in a new phase of projects that will bring 110 new townhomes, 160 condominium units and 9,390 square feet of retail space to the city’s coastline over the next two years. Prices points for each of the residential developments have not yet been announced, but for those that have, pricing begins at a cool $900,000.

The new, and no-doubt luxe, properties amount to a forecasted $300 million investment. That’s in addition to the $300 million iStar has already spent on a half dozen projects it’s undertaken so far, all permitted under a waterfront redevelopment plan adopted by the City Council 20 years ago with the intention of guiding the shore resort’s resurgence after years of decline.

“We have the task of trying to finish something that was started a long time ago,” Brian Cheripka, iStar’s senior vice president for land and development, told NJ Advance Media. “Now the redevelopment is moving in a positive direction and we’re seeing the resurgence of the city — and with these new developers coming in, this is a sign that the city continues to create momentum.”

So far, iStar’s most visible projects are the Asbury Hotel, a former Salvation Army retirement home that was overhauled and opened in 2016; Asbury Lanes, the music venue and bowling alley that was also completely overhauled before reopening in 2018; and the Asbury Ocean Club, a 17-story glass-and-steel condominium tower with units starting at around $900,000.

“There is such a rich history in the city already but the waterfront, because it was primarily vacant land, was absent from that fabric. So part of our goal has been to create a new chapter for some of these iconic venues and a rebirth of this city along the shore,” Cheripka said.

To incentivize interest from developers, Asbury Park has used PILOT agreements, or Payment In Lieu of Taxes, as a funding mechanism for the oceanfront’s revival. PILOTs are widely used in municipalities across the country and grant tax exemptions to developers and businesses as an incentive for them to build in blighted areas.

Deputy Mayor Amy Quinn told NJ Advance Media that when she was first campaigning for a seat on the city council in 2013, one of the main complaints voiced by constituents was “a lack of development.”

“So we spent a lot of time trying to kick start and initiate redevelopment in 2013 and forward, and I think now, having run in 2020, people want to see more conscientious equitable development,” Quinn said.

Some critics describe PILOTs as handouts, but proponents say that without a tax abatement, many projects would not be built at all.

According to Cheripka, the new developments announced in March will also create $3.6 million of new tax revenue — equivalent to approximately 15% of the total municipal share collected by the entire city last year.

Quinn said she couldn’t verify that estimate, but said she would “credit some of this development” with assisting Asbury Park in achieving greater fiscal stability and getting off the State’s Transitional Aid (TA) Program.

The next phase of oceanfront development will bring even more glitz to the seaside city. Toll Brothers will be developing a luxury townhome community along Wesley Lake — the Fortune 500 company’s first project in Asbury Park. The project, which is still in its early planning stages, will consist of five buildings with a total of 62 residences, ranging from two to four bedrooms, according to project schematics provided by iStar. The developer has not disclosed prices yet, as the project is still in the land use approval process with the city. Once approved, the project will likely take approximately one to two years to build.

And then there’s The Cove at Asbury Park from K. Hovnanian Homes, which features 48 townhomes with prices from $900,000 to more than $1 million, located at 320 Asbury Ave. Sales at The Cove opened in July 2021 and the townhomes were sold out by November. This development is currently under construction, with first deliveries expected later this year.

For those who missed their chance at The Cove, there may be appeal in the luxury residential community planned by Somerset Development — the team behind Holmdel’s BellWorks, the 2 million square foot redevelopment of the former Bell Labs property. Somerset Development has proposed building 160 condominiums and 9,390 square feet of retail space along 5th Avenue, down the block from the iconic Wonder Bar. Pricing has not yet been announced for the condominium units, since the project has yet to go before the planning board. Once fully approved, the development will likely take about two years to build.

“It’s a good mix of activity. It’s a lot of diverse housing product. So I think it adds to the overall balance of the community and it will add to the future of the city,” Cheripka said.

The projects will also contribute $1.9 million of annual special assessment payments to fund the installation of new public infrastructure in the waterfront redevelopment area. It all sounds good, but Cheripka said he knows that when it comes to redevelopment, “you can’t please everyone all the time.”

The city’s ongoing gentrification has generated controversy among longtime residents, who have voiced concerns at public meetings that the redevelopment projects would harm the environment and run counter to the city’s inclusive spirit. In recent years, most of the backlash was centered on iStar’s planned beachfront pool club, which the company says will fuel the shore resort’s rebirth as an upscale getaway but critics condemn it as an exclusive enclave that would further divide the haves from have-nots. After three years of contentious discussion, the Asbury Park Planning Board granted preliminary and final site plan approval last summer to iStar for the project. Construction of the beach club has yet to begin and an opening date for the beach club has not been announced, a company spokesperson said.

Asbury Park City Historian, Werner Baumgartner, said he and other longtime residents aren’t necessarily against development. They just want new developments to “be compatible with the historic context.”

“We’re in a place now where there are credible, large developers coming in, but I think they’re being allowed to shortchange Asbury Park to give us minimum standards in terms of architectural interest,” Baumgartner said.

Many of the new developments in this next phase of building — and those constructed in recent years, like the towering Asbury Ocean Club — fit under the category of contemporary architecture. And that has its place, said Baumgartner, who himself was a supporter of the modern Ocean Club. But he also wants the planning board to keep the city’s “heritage and character” in mind when approving future development.

“I’m pro-development that’s community centric,” Baumgartner said. “There needs to be some pushback from the city, in terms of better architectural standards and better developments fitting in with the existing communities adjacent to the redevelopment area, and not just accepting what is presented by developers as being the de facto standard.”

Michele Alonso, director of planning and redevelopment for Asbury Park, could not be reached by NJ Advance Media for comment.

“We may be loved for one project and people may have criticisms of another project — and that’s okay. Change takes time and we recognize that,” Cheripka said.

To address environmental concerns, Cheripka said iStar and its partners are “designing to future standards,” keeping in mind issues like storm resiliency.

“We’re trying to be thoughtful with our approach and create an environment that people can enjoy for decades to come,” Cheripka said.

Thank you for relying on us to provide the local news you can trust. Please consider supporting NJ.com with a voluntary subscription.

Jackie Roman may be reached at [email protected].