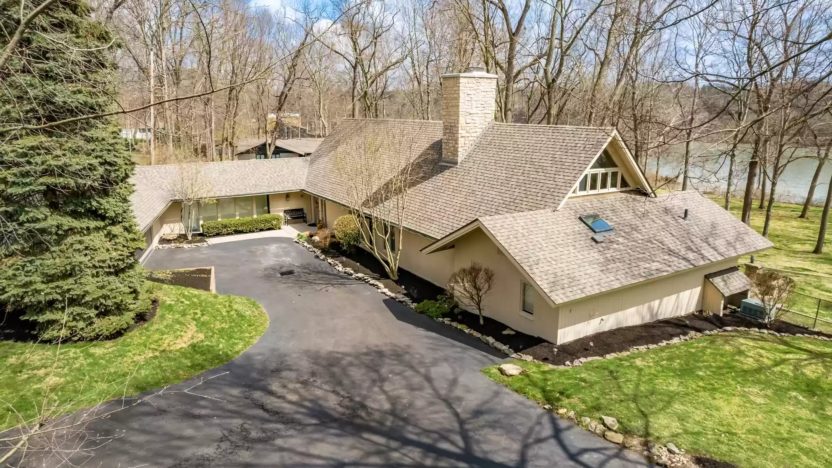 You can stargaze from the same window as John Glenn once did.

“This was originally John Glenn’s home that he and his wife, Annie, built with renowned architect Woody Acock. It really was a true collaboration,” says listing agent Margot Campbell Laumann, with Street Sotheby’s International Realty.

The Glenns built the 3,789-square-foot home just before Glenn was elected to the U.S. Senate, a job that required his traveling to Washington, DC. As a result, the Glenns didn’t live in this suburban home for long.

“He loved this home and wanted to stay there, but I think it just became too much for him,” Laumann explains. “He ended up moving to downtown Columbus.”

Featuring four bedrooms and three bathrooms, the home sits on almost an acre on the banks of the Scioto River.

“It’s a very private part of the river, where you cannot see cars on the other side of the river because of a park that’s across the way,” Laumann says.

Interior amenities have been updated, but the floor plan conceived by the Glenns remains the same.

“It’s a beautiful, sprawling ranch, and you just have tons of natural light that fills the house,” she says. “When you get inside and you see these 180-degree views of the water, it’s very impressive. The walls of windows really bring the outside inside.”

A unique staircase leads to a loft area that once served as Glenn’s office.

“The enormous bubble window was so he could view the stars at night, and it is a really cool space,” Laumann says. “When in the loft space, it’s pretty amazing to put yourself in John Glenn’s presence.”

A primary bedroom sits in a separate wing, and there’s yet another loft space close to the other bedrooms.

“I don’t know if he had grandchildren at the time, but I think he built [the home] with grandchildren in mind,” Laumann says. “It’s a beautiful floor plan where you can easily entertain.”

Outside, there’s a large deck with a big barbecue pit—an original element of the design.

“The family would roast hogs in the summer, and that outdoor entertaining space was very important to them,” Laumann says.

The property includes a boat dock with Trex decking and a detached workshop to store any water gear and backyard toys.

The agent believes the buyer will likely be a local who desires a place on the water.

“The perfect buyer is going to be someone that enjoys life on the water and being able to get to downtown Columbus quickly,” Laumann says. “It’s just a really special piece of property.”