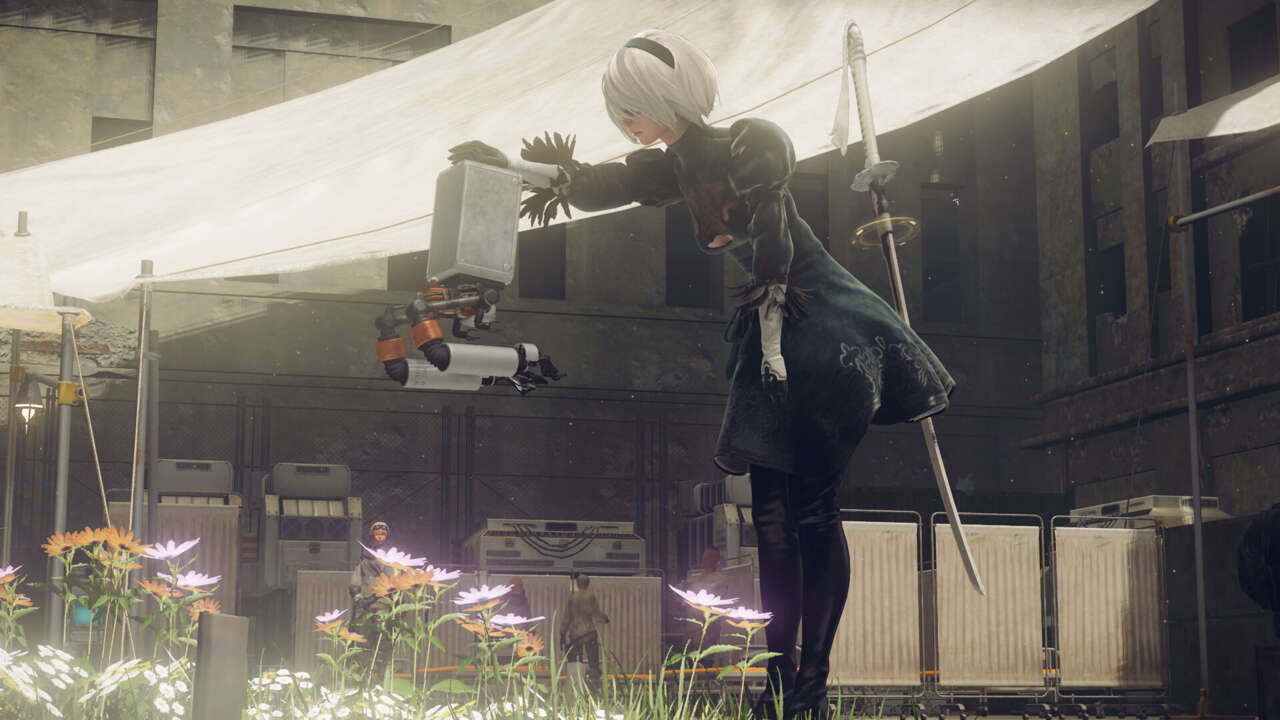 On the fifth anniversary of Nier: Automata’s release, Gabe Gurwin reflects on optimism and overcoming depression.

Content warning: In addition to major spoilers for Nier: Automata, this piece deals heavily with mental illness and mentions suicide.

In 2017, my life was, at least on paper, going fairly well. I had graduated college the previous May, I had steady work in my career field, and I had a supportive family and partner who wanted to see me succeed. But the thing about depression is its complete irrationality. It wasn’t sadness, but nothingness, that pervaded my day-to-day existence. Nothing seemed to matter, from maintaining relationships to enjoying my hobbies. It was strange, then, that Nier: Automata–a game which turns five today and consists largely of battles against alien robots and exploring a post-apocalyptic Earth–managed to help give me hope for the future.

It took me years before I even realized that had happened, and a few more before I was able to understand why. Nier: Automata’s brutal exterior may appear like it would send someone into a spiral of sadness, but its final message of unrelenting hopefulness in the face of pain is just what the hollow, miserable me needed to hear. “Yes, I feel terrible today. I felt terrible yesterday, and there’s a very good chance I’ll feel terrible tomorrow. But there’s also a chance that one day I’ll feel better, and I’ll need to keep trying to see that day.”

Something hard to convey to someone who has never suffered from depression is the monotony it often involves. Doing nothing but the essentials–and not caring about doing anything else–becomes routine. Many other action games have entertained this haze with truly mindless action, engaging through their repetition to those effectively sleepwalking through life. But Nier: Automata plays with this concept with the unexpected genre shifts it employs early on. Flying shoot-’em-up segments give way to on-foot hack-and-slash, side-scrolling platforming, and eventually even retro-style arcade and text adventure. They happen frequently, and often with no warning. “Oh, I guess we’re doing this now. Well, that’s fine.” It’s forcibly breaking up the routine, like getting kicked out of the house to go for a walk after spending hours playing games and napping.

These moments sometimes happened when Nier: Automata was going back through the same narrative content, as well. After seeing the credits roll, which is effectively about halfway through the game chronologically, you begin again as 9S, but there are major differences between the two arcs. 2B’s more straightforward segments contrast with 9S’s experimental and unusual ones. The shifts occurred in the middle of a war that was being waged by two sides whose masters had long perished. 2B knew this. Her route’s gameplay reflected this in its emotionless approach to each enemy encounter. It was the bright-eyed optimist 9S who was oblivious to the truth and continued to try in earnest.

As a young child oblivious to the world–to the concept of being anything but happy and the idea that life could be unfair–I was probably the same way. If we try our best, things are bound to work out… right? Of course, we all learn that’s not how life usually works, and when 9S eventually uncovers the truth surrounding his mission and its pointlessness, he doesn’t exactly take it well. He enters a destructive cycle, finding an enemy in rival android A2 but also seeing little reason for himself to exist. I found myself focused almost entirely on his story. To me, 9S became the protagonist of the game, and the one I most clearly identified with. I’m far from the only one to make this connection, with Sam Prell at GamesRadar having done so shortly after Nier: Automata launched in 2017. The experience gave Sam the nudge to go see a therapist and receive less-allegorical help. And it assured me I wasn’t full of it for seeing the connection.

What 9S went through wasn’t simple teenage angst after realizing his parents were uncool. What I saw with 9S was much closer to my own anxiety, depression, and later OCD, all of which made it so I couldn’t think about anything else. Finding a way to numb the pain became my primary goal each day, which is about as healthy as it sounds. These mental struggles upended my life and made it difficult to find a moment of solace, much less a greater meaning or goal, and an extreme version of this is on display as 9S devolves into a destructive force hellbent on A2’s demise.

2B, acting undercover to destroy 9S whenever he learned the truth so the pointless battle cycle could repeat again, was not the enemy, but a protector keeping his light from burning out. Only by forgetting his memories could he be whole again.

If only it were that easy, of course. Our memories shape us. I cannot forget my experiences, nor can I forget how happy, empathetic, and outgoing I was as a little kid. I can’t remove my desire to feel that way again. But director Yoko Taro and the Nier: Automata development team addressed this because repeatedly reverting 9S back to his past self before he learned of humanity’s demise wasn’t working. He would, by nature of his own curiosity and focus, always eventually find out the truth.

Likewise, even if my life had gone differently, I almost certainly still would have suffered from mental health problems. It runs in my family. Having a better friend circle or not getting bullied would have helped, but the forked roads would eventually still converge. Looking back with regret solved nothing; by contrast, it only made me feel worse.

It’s easy to see Nier: Automata as a pessimistic or nihilistic game, so I wasn’t surprised to see forum posts talking about how players found the game “depressing” or that they felt “depressed” after finishing it. The story involves the death of loved ones, the long-hidden extinction of the human race, and most disturbingly, the mass suicide of child-like robots because they couldn’t bear to live in a world where fear existed. Seeing all of this violence, hatred, and misery would make it easy to write it all off as the work of an edgelord who simply wanted to make something dark or messed up.

That couldn’t be further from the case, however. After all of that torment leaves the entire main cast dead and there being seemingly no point for this android race to continue existing at all, the game’s post-credits scene completely reframes the narrative. Yes, time after time, death after death, nothing has worked to achieve a lasting peace, and it’s quite possible that will continue indefinitely. But it’s also possible, through sheer force of will or luck, that a different future exists. If we give up now, we’re never going to find it. Crucially, the game doesn’t show said future, but it plants the seed of hope in our minds.

As that moment faded and my save data was automatically deleted, I knew Nier: Automata was the best game I had ever played. That unrelenting, irrational optimism–foolish optimism, to a cynic–was exactly what I needed to be shown to me. I needed to know that I could feel better eventually, despite my brain telling me that it all seemed meaningless. That it all was meaningless. Maybe. But maybe not.

I’d like to say that through treatment and a different outlook on life, my depression went away forever. It didn’t. In fact, the catalyst to write this was as much the return of that feeling as it was Nier: Automata’s five-year anniversary. But as the game helped me realize the first time, my future is what I make of it. This might be a never-ending cycle, but those moments of darkness could be few and far between.

“Maybe if I keep believing, my dreams will come to life.”