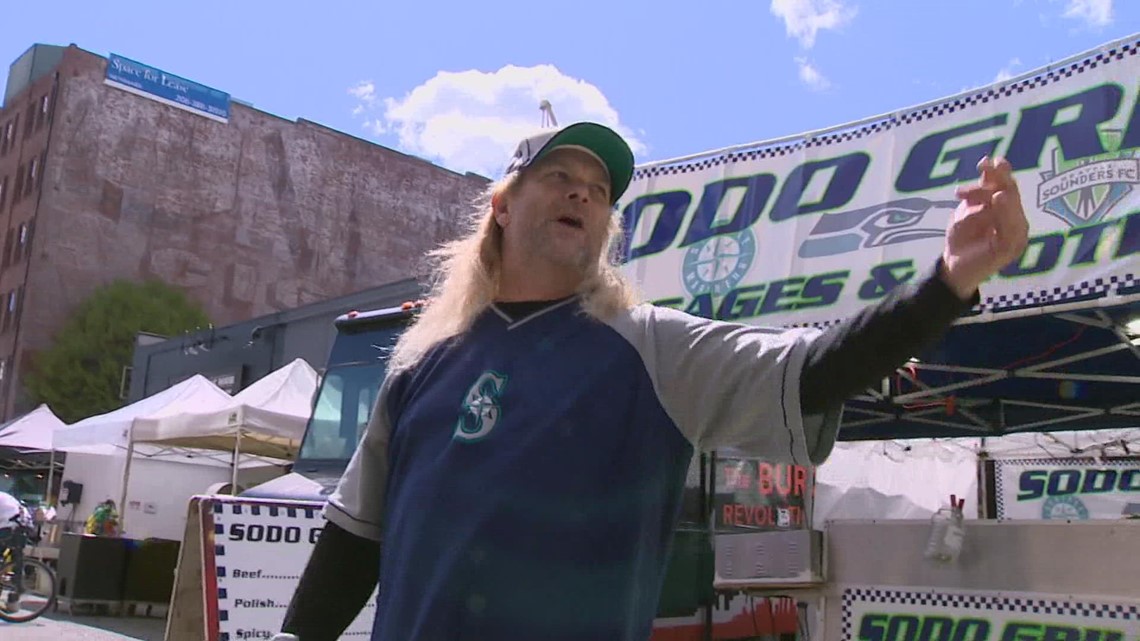 Opening day for the Mariners brings renewed optimism this season.

SEATTLE — Opening day is the most hopeful day of the year for baseball fans. This year that’s also true for businesses that depend on big ballpark crowds for their livelihoods.

The Mariners’ home opener on Friday saw John Edstrom, a sausage vendor for SODO Grill, bellowing his signature “is anybody hungry?” to fans as they passed by on a sunny Friday evening.

“Everyone is so excited. It’s like a continuation of the last three games of last season when we were fighting for a playoff spot,” he said. “The place is sold out and everyone is psyched.”

The first full baseball season in two years has businesses around the stadiums so anxious with anticipation they can almost taste it.

Gavin Chung started cooking the kettle corn for his stand a day and a half ago.

“I’ll be making more today,” he said. “We definitely don’t want to run out.”

Chung hawks several varieties of corn, including the original to Seattle corn, which is caramel, chocolate, and espresso.

He started setting up his stand outside the ballpark nine and a half hours before game time, eager to make his first sale of the season.

“It feels great,” he said “It’s encouraging. Hopefully there are many more to come.”

With pandemic shutdowns seemingly a thing of the past, analysts expect this year to be even better.

This year that number has already nearly doubled — and that’s before first the pitch.

According to the state’s Public Facilities District, T-Mobile Park generated more than $500 million in tax revenue in 2018.

With bars and restaurants throughout SODO finally filling up, visitors are filling a hole in the bank accounts of businesses like Gantry Public House, which opened two weeks before the pandemic hit.

“We had two Sounder games and an XFL game under our belt. The rest is history. We were shut down for at least a year,” said owner Farshid Varamini.

Adding to the optimism this season is the real potential for a playoff run.

Varamini hopes that is money in the bank.

“As a lifelong Mariners fan, I can’t wait,” he said. ‘It’s very good for business. The more we win the more people show up.”