What a Liberal Rabbi Learned at the Trump Hanukkah Party 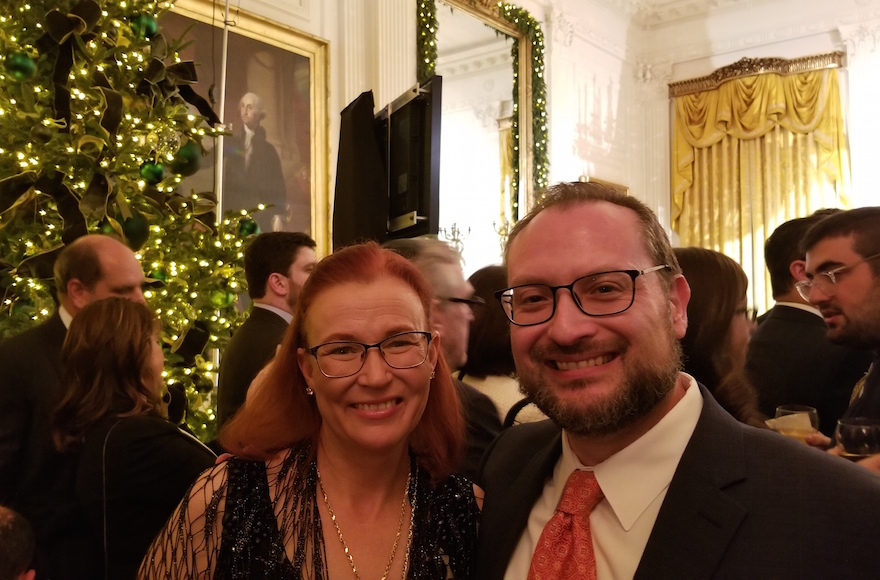 A Jewish woman walks into the post office to buy Hanukkah stamps for her holiday cards.

The person behind the counter asks, “What denominations?”

The Jewish woman responds, “Oy! Are we so polarized? Some Orthodox, some Conservative and some Reform.”

Yes, we are so polarized, both religiously and politically. Most reports about the White House Hanukkah party noted that leaders of the Reform movement and congressional Democrats were not invited. Whereas the Obama administration invited 1,700 people to two Hanukkah parties last year, the Trump administration invited a mere 300 to one such party.

Among them was one politically independent Reform rabbi from Des Moines, Iowa — me.

How in the world did I get an invitation?

I got on the list because I reached out to someone I knew in the administration while advocating for the State Department to maintain the position of special envoy to combat anti-Semitism. Earlier this year there were discussions that the position would be eliminated, and I and many others were urging the White House to reconsider.

I didn’t scream and yell. I didn’t call anyone names. I made a case for why that position was and is needed, and asked that my note be forwarded to whomever would be able to impact the decision. The position was officially retained, though as of yet no one has been nominated to fill it and that may not happen for a while longer.

A few months after I sent the email, out of the blue I received a call from someone at the White House inviting me to the Hanukkah party. I knew it would be a simple matter to decline the invitation. I was already going to be away that day at a conference. But it isn’t every day that one is invited to a party at the White House. President Obama held nine Hanukkah parties and I wasn’t invited to any of them.

Who else was invited?

This year, a significant percentage of those invited were Jewish friends and relatives of the Trump and Kushner families, with a large percentage of the rest seemingly connected to the Zionist Organization of America or the Republican Jewish Coalition. I’m sure many guests fell into all three categories.

A group of girls from a local yeshiva choir and their chaperones came to sing. Two Republican members of Congress attended, Reps. Lee Zeldin of New York and David Kustoff of Tennessee. The Israelis on hand included the U.S. ambassador, Ron Dermer. Supreme Court Justice Stephen Breyer and a handful of national Jewish community leaders were there, too. A majority of the guests seemed to be Orthodox Jews, with many affiliated with Chabad.

At the time my wife and I accepted the invitation, I had no idea just how exclusive the guest list was. I reached out to numerous friends who I figured would be far higher up on the priority list than I. No one I contacted was invited. I did not know that I would be the only Reform rabbi in attendance, maybe the only Reform or Conservative rabbi, and certainly one of a very small number of invitees who are not registered Republicans. Of those who are outspoken supporters of social causes usually found on the political left, I may well have been the lone person invited.

On the whole it was a relatively normal Hanukkah party. There were latkes and sufganiyot. The Marine Band played in the grand entryway and the girls’ choir sang “Mi Yemalel” (Who Can Retell?)  at the beginning of the formal program.

The president told a version of the Hanukkah story and boasted about his announcement a day earlier to recognize Jerusalem as Israel’s capital. A Holocaust survivor spoke of her experiences. Rabbi Meir Soloveichik of New York’s Congregation Shearith Israel offered the Orthodox version of the prayer for the government — with its awkward references to God who grants “dominion to rulers” — and the more fitting Shehecheyanu blessing. President Trump’s Jewish grandchildren kindled a single candle on a silver menorah. Guests joined in singing “Maoz Tsur” (Rock of Ages). We did not say the traditional blessings because it was not yet Hanukkah.

Other than a smaller group of VIPs, the vast majority of guests were not allowed to interact with the president, Vice President Mike Pence or the Kushner family, nor was there an opportunity for photographs to be taken with any of them.

Whether you blame Trump or his opponents, the political climate has seldom been so polarized. Last year the Reform, Reconstructionist and Conservative movements debated whether they should help organize a pre-Rosh Hashanah conference call with Trump. When they declined (a decision I disagreed with), Trump held his own call and did not invite the non-Orthodox rabbis. Just last week, top African-American leaders stayed away from the opening of a civil rights museum in Mississippi because Trump would be taking part.

If you’re wondering, leaders of the Reform movement, numerous other Reform rabbis and my congregation’s leadership, all of whom I told about the invitation, encouraged us to attend.

Those who know me and the advocacy that I do understand well that no politician or political party escapes my criticism. This administration is certainly no exception. But I engage civilly, even when others do not come close to returning the favor. My goal is always to help advance the causes dear to me, especially when those causes are under threat. I try to be as present as I can and speak to whomever I can, even if my counsel ends up being drowned out or ignored.

While most of the talk at the Hanukkah party was on Jewish geography and in support of the Jerusalem recognition, I mentioned to a handful of guests my concerns about the lack of an anti-Semitism envoy,  and the potential budget cuts and their impacts on health care and hunger advocacy at the state level.

The best quote about advocacy I know comes from a sports hero, hockey great Wayne Gretzky: “You miss 100 percent  of the shots you don’t take.” If you don’t engage in a way that might be successful in changing policy, if you don’t speak to and build relationships with those who might listen to you and influence others, you will never be heard and have a chance to influence policy.

Far too many people take a different path, believing that it’s better to scream in protest, name call, engage in virtue signaling and boycott rather than engage constructively and civilly with decision makers.

To paraphrase Gretzky, “One-hundred percent of the candles you don’t light stay unlit.”

This Hanukkah, let us bring light and not darkness into our world. Be present and reach out. Build relationships. Don’t boycott. Attend. Share your light. The people whose hearts and minds are kindled might help you to change the world.

(David Kaufman is the rabbi of Temple B’nai Jeshurun in Des Moines, Iowa.)

NOTE: The views expressed here are those of the authors and do not necessarily represent or reflect the views of JBN